Hope you enjoyed the 2011 Women’s World Cup as much as I did. While I can’t help but be disappointed that the American team lost, the fact is that Japan earned it, and everything fell into place for them. Much like the Brazil-USA quarterfinal, the Japan-USA final was played well, and the margin for error was non-existent.

You could look back to any number of plays to find the difference. The tackle by the Japanese defender and subsequent red card at the end of extra time to stop a brake away. Hope Solo getting shook up before giving up the tying goal late in the game. The turn over by the U.S. defended that lead to the first goal. The missed PK’s. In my opinion, the difference came down to the mental side of the game. 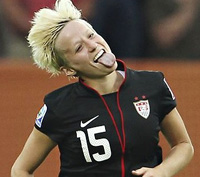 If you paid attention to the post game interviews, especially after the semi-final against France, the U.S. team was very much convinced winning was it’s destiny. Nevermind the fact that the Swedes put on a clinic in the opening round, or the fact they barely escaped Brazil, after the U.S. beat France, Hope Solo couldn’t help but talk about how “damn good” (the U.S. team is). Unfortunately, they wern’t as  good as she thought.

The worst? The turnover that lead to the first Japan goal. Can’t have that. Once the U.S. team got the first goal, they figured their destiny would advance forward the way they wanted it to just because, forgetting to realize that you have to play an entire game, and you can’t afford to give the ball away in front of your own goal.

The second goal.  Same mental lapse. You have the championship on the line, and all you have to do is close it out. While Japan certainly deserves credit for finding the back of the net, you have to be able to finish off the game from a mental standpoint (and a defensive one). If you spend too much time thinking about how “damn good you are” instead of being “damn good,” you might just give away a last minute goal. Compared to the way Brazil played with the lead against the U.S. in the quarterfinals, they certainly could have done a better job to slow the game down and grind it out.

In the end, I think the U.S. team’s overconfidence/borderline cockiness also came back to bite them in the worst way. At first, it was too much swagger, and then when PK’s came around, it was not enough. Three missed PK’s in a row, wow, what can you say? Despite some great individual efforts (Megan Rapinoe is an absolute beast, that girl can play), the team collectively crumbled, and I ‘m not afraid to say it.

What do you think? Anyone else feel the U.S. team got a little over confident? Did you even watch? If you didn’t you missed out on some great soccer.